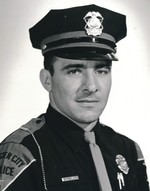 Robert “Bob” Villier, 79, of Webster City, Iowa, passed away Saturday, May 23, 2020, surrounded by family at Van Diest Medical Center. A Memorial Celebration will be held at a later date, with Foster Funeral and Cremation Center serving the family.
Robert Ray Villier was born July 7, 1940, to John and Elsie (Shaw) Villier in Des Moines, Iowa. He graduated from East High School in Des Moines in 1958. Robert married Sharon Peterson on April 12, 1958. He worked 24 years for the Webster City Police Department, where he served as a sergeant. He also served on City Council during the first stage of Second Street’s redevelopment. During his time on the council, he also brought entertainment in the form of Cajun music to the annual Raspberry Festival.
Robert is survived by his wife of 62 years, Sharon; daughters, Trudi (Mike) O’Connell of Des Moines and Tami (Rick) Peterson of Webster City; granddaughters, Caitie and Emily Peterson; sister, Carol Jeanne Trotter of Des Moines; and many nieces and nephews.
In addition to his parents, Robert was preceded in death by his brothers, Harold and John Villier.
Robert was a member of Trinity Lutheran Church and the Iowa State Police Association. After receiving a kidney transplant in December of 1987, he became a member of the Life from Life Transplant Group and attended several Transplant Olympics around the country. He was a bike safety officer at WCPD and held many bike safety demonstrations with Mike the Bike for the children of Webster City. For this work, he was acknowledged as a Friend of Education in 1981.
At the beginning of their marriage, Robert and Sharon enjoyed square dancing at events around the state. Robert loved the Iowa State Fair, only missing two in his life, and he and his family enjoyed camping there in recent years. He could often be found driving his two Westies, Zoey and Lily, around the campground on his scooter, or, while home, relaxing with his cat, Rusty, on his lap.
Robert enjoyed keeping up with the latest technology trends, cheering on the Iowa Hawkeyes, wood turning, and creating jewelry from glass. He and Sharon traveled often to visit family and friends. One of their favorite places to winter was in Arizona.
Robert loved his family, his McDonald’s “Lunch Bunch” friends, and his community. He was always quick with a joke or a silly song, ready to put a smile on anyone’s face. He will be remembered fondly and missed dearly.
The family would like to thank the doctors, nurses, and staff of Van Diest Medical Center for their outstanding care and support for Robert over the years, and especially during his last days in comfort care.
In lieu of flowers, donations can be made to the Friends of Wilson Brewer Park Fund at the Enhance Hamilton County Foundation.
You can write a personal tribute to Robert for the family at www.fosterfuneralandcremation.com.