To share your memory on the wall of Robert Villier, sign in using one of the following options:

To send flowers to the family or plant a tree in memory of Robert Villier, please visit our Heartfelt Sympathies Store.

Receive notifications about information and event scheduling for Robert

There are no events scheduled. You can still show your support by sending flowers directly to the family, or planting a memorial tree in memory of Robert Villier.
Visit the Heartfelt Sympathies Store

We encourage you to share your most beloved memories of Robert here, so that the family and other loved ones can always see it. You can upload cherished photographs, or share your favorite stories, and can even comment on those shared by others.

Posted Jun 03, 2020 at 12:34pm
Bob was a classmate at Willard Elementary. We met him again, along with his wife, at an EHS alumni banquet when my husband, Harold was still alive. Our thoughts & prayers are with you during this difficult time. Sincerely, Janet Belieu & family.
Comment Share
Share via:
NP

Posted May 30, 2020 at 07:34pm
Sharon and family,
I am so sorry to hear of Bob's passing. Dick always enjoyed working together with Bob at the Police Department, as neighbors and social gatherings. Many memories of past years.
Sharon, I will be in touch with you and the other gals later this summer.
Nancy Eppard Pilcher
Comment Share
Share via:
AH

Posted May 30, 2020 at 05:30pm
I had the pleasure of getting to know Bob when I worked at KJFJ (now KQWC) Radio in Webster City beginning in the late 1960s. I initially worked the sign-on shift and on occasion when Bob was on duty he would drive out to the radio station and have a cup of coffee in the studio with me. One dark morning, I was reading the 6 a.m. sign-on news and could hear a very slight noise outside the studio where the lights had not yet been turned on. Eventually, I heard a metallic click on the large double-glass studio window behind me. I was having trouble concentrating on the news copy I was reading so I finally cut the microphone and turned around to see what was clicking on the the glass. All I could see was a black revolver pointing at me. After a few seconds Bob put his face up to the window so I could see it was him. He told me later that from the look of horror on my face he was afraid I was going to have a stroke or something. I went back to reading the news, Bob got himself a cup of coffee and we had a good laugh after the newscast. I loved Bob's sense of humor. He was a great guy. Villier family, you all have my deepest sympathy.
Comment Share
Share via:
LR

Posted May 29, 2020 at 01:28am
You were a wonder Sargent and a great shift supervisor, when I served under you. You taught me things the police academy never did. I enjoyed your humor too. You will be missed. But, I'll see you again, in heaven. Leonard Raygor
Comment Share
Share via:
PM 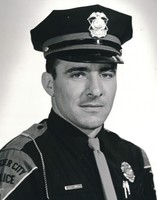