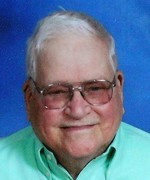 Robert “Bob” Frederick, 92, passed away peacefully in his sleep July 12, 2019 at the Israel Family Hospice House in Ames, Iowa.
Robert Arthur Frederick was born September 2, 1926 at 1016 Geil Street, Des Moines, Iowa to Arthur and Emily Frederick. He was raised in the Des Moines area and graduated from Bondurant High School in 1945. Bob was drafted the day he turned 18 and left for Army basic training in the middle of his senior year. His mother was allowed to accept his diploma as Bob was actively serving his country during WWII.
Upon his discharge from service, Bob worked as a hired farm hand in the Des Moines area. He met Telva Bibler in 1946 in Des Moines and they married on December 13, 1947 at the Little Brown Church in Nashua, IA. They farmed north of Stanhope for 58 years before retiring and moving to Jewell in 2003.
He was a devoted husband and father. He enjoyed ‘tilling the soil’ and always had time for any activity involving “his girls” and grandkids.
Bob enjoyed working with the 4-H youth including serving as chairman of the Hamilton County 4-H Extension Council. He and Telva enjoyed chaperoning 4-H Chicago award winners and several 4-H exchange trips.
Bob was a member of the United Methodist Church in Stanhope and when the UMC was closed, he joined the Community Church of Kamrar.
Bob was an avid bowler, reader, seed corn salesman, American Legion member and a 36 year member of the Stanhope Lions. He always wore a smile and had a sense of humor. He and Telva enjoyed traveling the 50 states, Canada, Mexico and enjoyed numerous cruises. One of his favorite hobbies was his model trains.
He loved spending time with his girls, grand & great grandchildren as they were growing up. Family was the heart of his daily activities.
Bob is survived by daughters Pam Briggs and Jackie Frederick both of Jewell; three grandchildren - Sonya (Jeff) Burmeister of Nobleboro, ME, Rodney (Heather) Briggs of Johnston, and Rodger (Terri) Briggs of Waterloo; 6 great-grandchildren - Aurora, Kirsten, Triston Briggs of Johnston, Dylan Burmeister of Nobleboro, ME, Emerson and Gavin Briggs of Waterloo; numerous cousins, nieces and nephews.
He is preceded in death by his parents, his wife of 69 years, infant son Kenneth; two sisters Betty Anderson and Pauline Miller; and son-in-law Barry Briggs.
Visitation will be Monday July 15, 2019 from 5:00 p.m. to 7:00 p.m. at the Community Church of Kamrar. Services will be 10:30 a.m. Tuesday, July 16th at the church with Pastor Peter Mueller officiating. Burial will be at Graceland Cemetery.