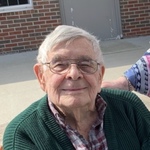 Richard Kuebler, 89, of Webster City, formerly of Tucson, AZ and Bettendorf, IA, passed away on Sunday, January 26, 2020 at Southfield Wellness Community. A Celebration of Life will be held from 10:30 a.m. – 12:30 p.m. on Saturday, February 1, 2020 at Palmer Hills Golf Course in Bettendorf, IA.
Richard Norbert Kuebler was born in Muscatine, IA to Butch and Lillian Kuebler on March 2, 1930. He eloped with JoAnn Doering on May 28, 1955 and moved to Bettendorf in 1958. He worked as a material expediter for ALCOA for 30 years, retiring in 1979. He was a member of the Iowa National Guard for 12 years. Richard was an avid Cardinals fan with his daughters, even though his wife and sons were Cubs fans. When he lived in Bettendorf, he was a member of DANK (German Club) and volunteered for United Way, built several apartments and managed properties. Richard and JoAnn enjoyed several years of traveling anywhere they could drive to as he was afraid of flying. They settled down again in Tucson, AZ in 2010. He enjoyed floating in the pool and becoming a docent for a train museum. They moved to Webster City, IA in 2019 to be closer to family.
He is survived by his wife of 64 years, JoAnn of Webster City; children, Rick Kuebler, Lori (Tim) Ulloa, Bret (Cheryl) Kuebler all of Bettendorf; Juli (Scott) Jaycox of Webster City; grandchildren, Anna, Emma, Cooper and Maia; two great-grandchildren; brother, Dennis (Carolyn) Kuebler of Muscatine; step-grandchildren, Tia and Shay; and a nephew and nieces.
Richard was preceded in death by his parents and a daughter-in-law, Ann Kuebler.
In lieu of flowers, memorials may be made to the Alzheimer’s Association.
www.fosterfuneralandcremation.com