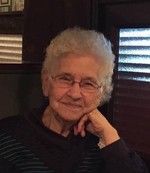 Norma Koop Lake, 94, of Webster City, died Wednesday, December 11, 2019 at the Van Diest Medical Center. A Celebration of Life will be held at 10:30 a.m. Monday at the Asbury United Methodist Church, with Pastor Jeff Flagg officiating. Burial will be in the First Presbyterian Cemetery, east of Kamrar. Visitation will be one hour prior to the funeral at the church. Foster Funeral & Cremation Center is entrusted with the services.
Norma Jean Ward, daughter of Edgar and Bessie Granby Ward, was born on April 8, 1925 at Jewell. She received her education in the Ellsworth Public school system. On June 1, 1942, she married Paul C. Koop at Bethany, MO. Paul preceded her in death in 1976. On May 10, 1980, she married Howard K. Lake at Webster City. Howard preceded her in death in 2003.
Norma is survived by daughters and sons-in-law, Karen and Russell Hill of Urbandale and Jane and Mike Jacobson of Webster City, nine grandchildren, 17 great-grandchildren and numerous nieces and nephews. She is also survived by Howard’s children and their families, Elbe Lake, Andrew and Pat Lake, Kenneth Lake, J
ane Felts, and Lexie Spencer.
In addition to her husbands, she was preceded in death by her sons, Terry Koop in 1993 and Michael Koop in 2017 and 10 siblings.