To share your memory on the wall of Myron Vanhorn, sign in using one of the following options:

To send flowers to the family or plant a tree in memory of Myron Vanhorn, please visit our Heartfelt Sympathies Store.

Receive notifications about information and event scheduling for Myron

We encourage you to share your most beloved memories of Myron here, so that the family and other loved ones can always see it. You can upload cherished photographs, or share your favorite stories, and can even comment on those shared by others.

Ed and Lenore Dick sent flowers to the family of Myron Vanhorn.
Show you care by sending flowers

Posted Jan 26, 2020 at 10:58am
Uncle Joe was always telling stories and I loved listening to them. He always had a smile on his face. One time he had to go into town and he let me go with. He had an old pickup with stick shift on the column and he taught me how to shift it, but then he shifted it really fast, I was so impressed with how fast he could do that And he was just beaming from ear to ear. Hi
Comment Share
Share via:
ED

Medium Dish Garden was purchased for the family of Myron Vanhorn. Send Flowers 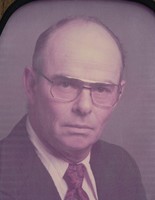