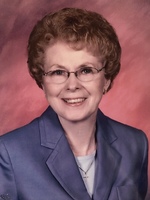 Maxine Schaa Bean, 89, of Santa Clara, CA passed away Saturday, May 9, 2020.
Maxine was born to Lars and Marguerite (Sandve) Leckness on May 31, 1930. She was the oldest of eight children. Maxine started school in Ellsworth and later graduated from Radcliffe High School in 1948. On September 6, 1953, she was united in marriage to John E. Schaa at the Little Brown Church in Nashua. Maxine worked at Farmers State Bank in Jewell for 35 years. After her husband John passed, she moved to California where she continued to work in banking for many years.
Maxine was well-known for her spirit and friendly and kind nature. She enjoyed
spending time with family and friends, traveling, and going to the movies. She will be
greatly missed by her family.
She is survived by her daughter Laurinda (Bruce) Smith of Jewell; two grandchildren:
Jennifer (Jacob) Kron of Illinois and Nicholas Smith of New York; and two greatgrandchildren.