To share your memory on the wall of Kenneth Miller, sign in using one of the following options:

Kenneth, son of Raymond and Pearl (Mitchell) Miller, came into this world on December 23, 1928. He was born in the family home on a farm near Alden, Iowa. He went to elementary school in a one-room schoolhouse in Burdette, Iowa. He graduated from Popejoy High School, in Popejoy, Iowa. He served in the United States Army during the Korean Conflict and was stationed in Germany. Kenneth was united in marriage to Della Marie Breitenkamp on September 27, 1953 at St. Paul’s Lutheran Church in Webster City.

For many years they farmed near Blairsburg, Iowa. They left farming and moved to Webster City for a few years where Ken worked at Franklin Manufacturing. They then moved to Ames, Iowa where he worked for many years at the Iowa State University Dairy Farm. When he retired, he and his wife continued to live in Ames for several more years before returning to Webster City, where they have resided for more than 25 years.

In lieu of flowers, the family requests Memorials to be given in Kenneth’s memory to St. Paul’s Lutheran Church, Webster City or the American Legion Post #191.
Read Less

To send flowers to the family or plant a tree in memory of Kenneth Miller, please visit our Heartfelt Sympathies Store.

Receive notifications about information and event scheduling for Kenneth

We encourage you to share your most beloved memories of Kenneth here, so that the family and other loved ones can always see it. You can upload cherished photographs, or share your favorite stories, and can even comment on those shared by others. 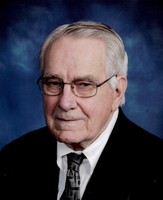