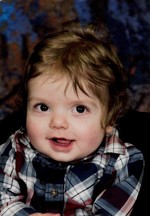 Hunter Ronald Carlson Gordon was born on December 11, 2018. He was welcomed into this world, with an abundance of unconditional love, by his parents; Carl Gordon, Nicole Ekstrom, Jamey Louk and Holly Weisberg–Louk.
During his short life he touched so many with his contagious smile and calming temperament. Hunter attended Webster City Daycare where he had many friends and playmates.
He unexpectedly left this world on March 20, 2020. He left behind his parents; siblings, Peyton and Xander Vote, Sam and Gracelynn Louk; grandparents, Melissa (Lisa) Gordon of Fort Dodge, Justine Ekstrom of Webster City, Diane and Kerry Hanlon of Paton and Frank and Mary Weisberg of Shelbina, MO.
He is preceded in death by his brother, Zayden Vote; uncle, Ronald Gordon; aunt, Angela (Weisberg) Burger; great-uncle, Kenneth (Kenny) Gordon; great-aunt, Barbara (Till) Wood and grandfather, Michael Louk.
Hunter was laid to rest at Lost Grove Cemetery in Gowrie on March 26, 2020.
A Celebration of Life to honor Hunter with extended family and friends will be held at a later date due to the state and federal guidance on gatherings due to the COVID-19 pandemic.