To share your memory on the wall of Eleanor Anders, sign in using one of the following options:

To send flowers to the family or plant a tree in memory of Eleanor Anders (Hoversten), please visit our Heartfelt Sympathies Store.

We encourage you to share your most beloved memories of Eleanor here, so that the family and other loved ones can always see it. You can upload cherished photographs, or share your favorite stories, and can even comment on those shared by others.

Posted Jul 15, 2019 at 11:09am
Connie & Family: Your sister was beautiful in high school & still was to this day. My sympathy & condolences to all of you & will be thinking of you today as you say goodbye to her. Thankful her suffering & pain is at an end & she is resting in peace. Jackie & Darwin
Comment Share
Share via: 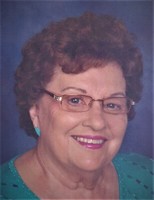