To share your memory on the wall of Donald Messerly, sign in using one of the following options:

To send flowers to the family or plant a tree in memory of Donald Messerly, please visit our Heartfelt Sympathies Store.

Posted Sep 16, 2019 at 07:30pm
Wyn Ann and Dick,
Condolences on Don's passing. Has been quite a time since I last saw him at the VFW in Fort Dodge, will always remember how well he treated me after discharge from the Navy and returning home. May he rest in peace.
Regards,
Jim Engels
Comment Share
Share via:
AH 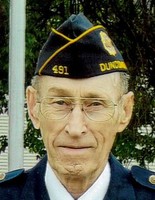