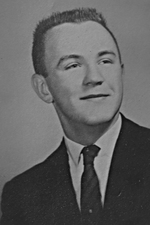 Don Bottorff, 78, a long-time Webster City husband, father, grandfather, attorney, brother, workaholic and one of the wittiest humans that ever lived, said his last “See ya later” on Wednesday, August 19, 2020 at Paula J. Baber Hospice Home after a long and heroic battle. A Celebration of Life will be held in 2021. Foster Funeral & Cremation Center is assisting the family.
Don Jerre Bottorff, son of Roy and Alyce Carson Bottorff, was born April 8, 1942 in Webster City. He graduated from Lincoln High in 1960 after intense studies including the accordion and the best known tactics for tug – of –war. Don then attended Iowa State University Navy ROTC, joining the Phi Gamma Delta fraternity and majoring in Government. He graduated from Iowa State University in 1964.
On June 6, 1964 Don was united in marriage to Beth Grandgeorge in Webster City. Don then proudly served our country as a Lieutenant JG in the United States Navy on the USS Kitty Hawk aircraft carrier during the Vietnam War. Don and Beth moved to Marion, Iowa in 1966 as Don began his studies at the University of Iowa College of Law. The couple spent the summer of 1968 residing in Alexandria, MD while Don clerked with the United States Department of the Navy’s Judge Advocate General’s (JAG) Corps.
Don graduated with a JD from the University of Iowa College of Law in 1969 and became a member of both the Iowa State Bar Association and the Minnesota State Bar Association. Don, Beth and their first child then moved Minnesota where Don served as Special Assistant Attorney General. The family moved back to Webster City in 1971, where Don joined the law firm of Hemingway and Myers. Early in his career he served as a Magistrate Judge in Hamilton County. He practiced law in Webster City until October, 2019 when he retired due to health issues.
Don is survived by his wife Beth of 56 years; children, Susan (Rod) Ahlers Leman of Fort Dodge, Doug (Margaret) Bottorff of Iowa City, Shelly Bottorff of Fort Dodge; grandchildren, Ben, Kate, Lauren, Jack, Frances, Henry, Emmett, Jillian; sister, Marilyn (Tom) Taylor of Shell Rock and many extended family members. Don is also survived by his loyal 4-legged sidekick of 7 years, Bundy; grand-dogs Bella, Elsa, Nox and grand-cat, Molly.
Don was preceded in death by his parents and his brothers, Daryl Bottorff and Dick Bottorff.
He was a member of Asbury United Methodist Church, the Iowa State Bar Association, Hamilton County Bar Association, past member of the Minnesota State Bar Association, past Hamilton Co. Hospital board member, past Kendall Young Library board member and the American Legion Post #191. He also served as the last known Mayor of Seneca Street and enjoyed many hours at Izaak Walton, playing cribbage, fishing, canoeing, doing math problems and watching Pink Panther movies with his children and grandchildren.
Memorials may be left to the discretion of the family.