To share your memory on the wall of Diane Teig, sign in using one of the following options:

To send flowers to the family or plant a tree in memory of Diane Teig (Teig), please visit our Heartfelt Sympathies Store.

Receive notifications about information and event scheduling for Diane

There are no events scheduled. You can still show your support by sending flowers directly to the family, or planting a memorial tree in memory of Diane Teig (Teig).
Visit the Heartfelt Sympathies Store

We encourage you to share your most beloved memories of Diane here, so that the family and other loved ones can always see it. You can upload cherished photographs, or share your favorite stories, and can even comment on those shared by others.

Posted Nov 21, 2019 at 01:58am
Worked with Diane most of her postal years. We loved to banter back and forth even after she retired. Sorry for your loss. Will miss her.
Beth Lewis
Comment Share
Share via:
PC

Posted Nov 19, 2019 at 05:23pm
Diane our class of 68 will miss you. You always came to our classmates lunches but usually the last one there. Which we kidded you about being late. Glad that we got to see you last year at our 50th class reunion. It sure was a fun night. God Bless you Diane R.I.P.
Comment Share
Share via: 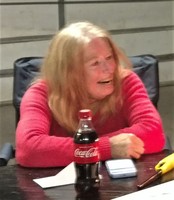