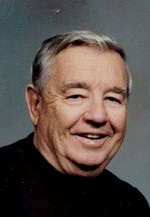 Clifford Hayes, 94 of Webster City died on Wednesday August 26, 2020 at Windsor Manor. Private family
services will be held at a later date. Foster Funeral and Cremation Center is assisting the family.
Clifford Earl Hayes was born on August 2, 1926 the son of Lester and Blanche Nelson Hayes in Webster
City. He went to Mud Hollow Country School and graduated from Lincoln High in 1943. Cliff married
Dorothy Marie Koob on April 17. 1949. The couple farmed with his father until 1953 when the farm was
sold. They moved to Webster City and Cliff went to work for Morton’s Frozen Food as a maintenance
man on a pie line. In 1956 he took a job with Peoples Natural Gas. In 1957 he moved to Maquoketa to
put natural gas into the town. In 1960 they returned to Webster City for a short time, then moved to
Fayette to install natural gas. Fayette was the center of 10 towns and had a large railroad that made
shipping easier for the large pipes The family stayed in Fayette until 1965, when they then moved to
New Hampton where Cliff and Dorothy both received their real estate licenses. The couple then
returned to Webster City where they were able to work together selling real estate
Cliff spent the last years of Dorothy’s life as her devoted servant and protector.
Cliff, is survived by his children; April (Ronald) Brott of Ankeny, Barbara (Bob) Hauer of Waucoma and
Wyatt (Susan) Hayes of Farmington, New Mexico; grandchildren, Kurt (Beatrice) Hauer, Sarah (Mike)
Charbon, Joshua Brott, Jacob Brott and Joseph (Michele) Brott, Matt (Chelsey) Nelson, Brent (Rachel)
Nelson; great-grandchildren, Matthew and Madeline Charbon, Allyson and Alexander Hauer, Lillian and
Lucas Brott, Jase and Tucker Nelson, Raegan and Copper Nelson; brothers and sisters- in- law; LeRoy
Hayes of Urbandale, Russell (Connie)Hayes of Stewartville, MN, Gene (Janet) Hayes of Fort Dodge,
Teresa Hayes, Alice Hayes, Beverly Hayes, Ted (Jeri) Hayes all of Webster City, and many cousins, nieces
and nephews.
He was proceeded in death by his parents; his wife in 2013; brothers, Harlan, Robert, Steve, Gary and
Roger; sisters-in-law, Marilyn, Glenda and Karen.
Memorial Contributions may be left in Cliff's memory to the Webster City Fire Fighters Association.