To share your memory on the wall of Christopher Scott, sign in using one of the following options:

Christopher Clarence Scott was born November 8,1950 at Fort Dodge, son of Clarence S. Scott Jr. and Dorothea M. Smith Scott. He would have been born in Webster City but at the time the hospital was overly crowded or maybe there simply were not enough beds in the maternity department and babies were being born in the hallways. His mother decided that she wanted the comfort of a bed over Chris wanting to be born in Webster City. Nonetheless, he was raised in Webster City, with one year living in Bryan, Texas. He attended St. Thomas Aquinas School and graduated from Webster City High School in 1969. He joined the armed services at Des Moines, April 27,1970, completed training at Fort Lewis, WA then took training for the medics at Fort Sam Houston in San Antonio, TX. He reported to duty at Fort Hood TX after his training where his duties included playing on the Army golf team. In 1976 he married Karen Olson, they later divorced. He married Beverly Johnson, which also ended in divorce. He decided not to marry again as he didn’t seem to be successful in that sport arena. He believed in that old adage of three strikes and you’re out. Fearless as he was, he wasn’t going to take that risk.

Chris was a natural athlete excelling in golf (his love), playing pool, baseball, wrestling, basketball, bowling, tennis, swimming and most anything he tried his hand at, even standing broad jump and agility run while in Scouts. He was fearless when trying new things. The phrase, “Here, hold my beer” may or may not have originated with him. In the end, the beer did get the better of him. He was a professional bricklayer, paint striper, carpenter or any other occupation that he felt inclined to try. He tried his hand at driving a Soap Box Derby car his dad helped him build when he was just 12 years old, sponsored by the Webster City Police Department. Ever since he has enjoyed a special relationship with the police department.

He is survived by a whole lot of people that will miss him, especially his mother, Dorothea Scott of Boone; 7 brothers: John (Valerie) of Colorado, Robert (Sherry) of Austin TX, David of Indianapolis IN, Andrew of Boone, Timothy (Anna) of Chicago IL, Daniel (Guille) of Pasadena TX, Joel (Sue) of Ankeny; 6 sisters, Susan Powell of Killeen TX, Teresa (Craig) Davis of Magnolia TX, Toni Scott of Lebanon IN, Mary Beth Scott of Boone, Jody Haws of Ankeny, Rebecca Scott of Boone and his uncle Earl Scott of Davenport, as well as 23 nieces and nephews, 35 great-nieces and great-nephews with three more on the way, and his very close friend, Lori Bromm.

He was preceded in death by his father in 2002, his brother Theodore in 1955; niece Brandy Dillingham in 1973, nephew Jason Dillingham in 1996, great-niece Emma Ivanovsky in Aug 2015 and great-niece Kara Dillingham in Aug 2020; uncles, Cletus Smith, Eugene Smith, Howard Scott and an aunt, Isabelle Scott. He was also preceded by all of his grandparents who no doubt were surprised to see him so soon.
Read Less

To send flowers to the family or plant a tree in memory of Christopher Scott, please visit our Heartfelt Sympathies Store.

Receive notifications about information and event scheduling for Christopher

There are no events scheduled. You can still show your support by sending flowers directly to the family, or planting a memorial tree in memory of Christopher Scott.
Visit the Heartfelt Sympathies Store

We encourage you to share your most beloved memories of Christopher here, so that the family and other loved ones can always see it. You can upload cherished photographs, or share your favorite stories, and can even comment on those shared by others.

Posted Oct 11, 2020 at 01:00am
We want to thank all those of the Class of 1972 for their thoughts and prayers for us. We appreciate your comments and the love you shared. Chris was an amazing athlete, hard worker and full of life and fun. We are going to miss him so much.

Posted Oct 10, 2020 at 10:07pm
Chris was a real salesman, he got me to take over his morning paper route the summer of 1962, and getting up at 5:00 am stunted my growth.
He was the best pitcher on our Peewees team and I also remember him sinking a difficult downhill putt on the #1 green at the Country Club; it's not a surprise he played military golf.
When I think back to the old days on Pleasant St., Chris was one of the kids who was fun to be around; we will all miss him.
Doug McMurray 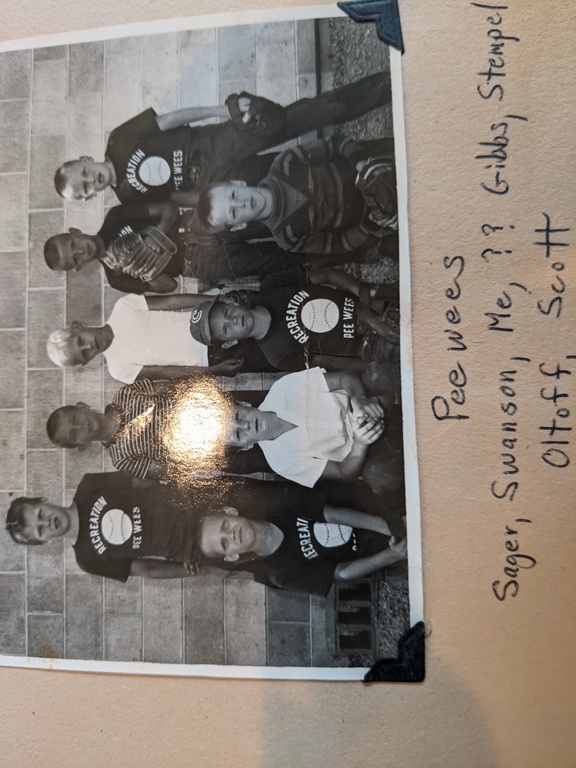 Doug, this was the lineup for the Pee-Wee Cardinals in July 1960. One of these names fill in the ?? on your picture? Thank you for sharing! Front row left to right: Loren Gibbs, Donald Stempel, Danny Olthoff and Christ Scott. Back row left to right: Bill Sager, Calvin Swanson, Doug McMurray, Steve Shumate and Larry Roe. 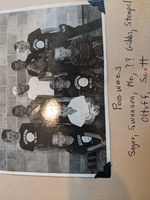