To share your memory on the wall of Angie Andrew, sign in using one of the following options:

To send flowers to the family or plant a tree in memory of Angie Andrew, please visit our Heartfelt Sympathies Store.

Receive notifications about information and event scheduling for Angie Andrew

We encourage you to share your most beloved memories of Angie Andrew here, so that the family and other loved ones can always see it. You can upload cherished photographs, or share your favorite stories, and can even comment on those shared by others.

Posted May 14, 2019 at 11:11am
I have warm memories of Angie from the Rainbow ("Bow"), especially after the passing of my brother Jimmy and Mom (Phyllis)... Angie was always genial and kind.. and as I note from another entry... was quick to refer to friends was "Darlin'".. I have been away from WC for some time.. but the memories seem like yesterday.. My condolences to the family, a sweet, good-hearted lady for sure.
Comment Share
Share via:
CB

Posted May 13, 2019 at 11:23am
Jake, Robin and families
I am so sorry for your loss. Wishing you find peace and comfort in her memories. RIP "Darlin" Connie Brock 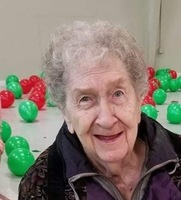